Ivory Coast: DIGITECH SA signed a convention for a civil registry management pilot project with the Mayor of Attécoubé 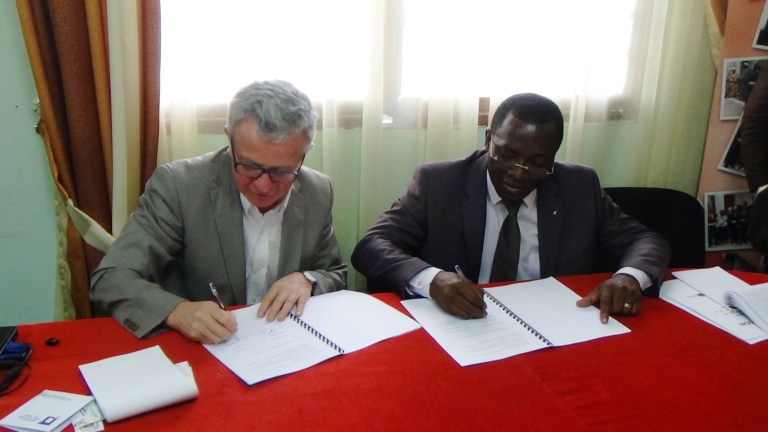 During his last visit to the Ivory Coast, the CEO of the French leader in civil registry systems, Joël Couderc, accompanied by his antenna officer in Abidjan, Philippe Meluse, signed a convention regarding a civil registry management pilot project with Danho Paulin Claude, Mayor of Attécoubé.

Established in 1992, listed on the Euronext Stock Exchange, having national and international expertise implemented in France, Switzerland, Romania and Africa, the French company DIGITECH SA designs and integrates software solutions for the dematerialization of documents, being highly specialized in the civil registry sphere.

EVELIN (Event Life Numerized) is one of the key products. It is the first full web solution on the market which allows the complete management of the civil registry, with the strict observance of the legislations in force in the respective countries. With this pilot project in Attécoubé, DIGITECH SA will be able to validate the suitability of its software, tailored on the needs of the Ivorian town halls, at a local scale. This solution is so versatile that it can be customized at regional and national level. At the same time, it aligns to the perspective set out by the Minister of Internal Affairs and Security, Hamed Bakayoko, made public on February 10th in Abidjan, consisting in the implementation of a unique register for the individuals living in the Ivory Coast, aimed at improving the civil registry management.

The solution put forward in this pilot project in Attécoubé consists in a 3-phase process: integration of document images, indexing and quality control based on random sampling. These operations facilitate the research and editing of the documents, the use of the images from previously performed operations and the secured filing of the created documents.

The know-how of DIGITECH SA is built upon a solid experience in this field at an international level (Algeria, Cameroun, Ivory Coast, Mali, Morocco, DRC), as well as in the largest French cities (Paris, Marseille, Lyon, Toulouse, Bordeaux, Cannes etc.).

The Attécoubé Town Hall plays a pioneering role in the modernization of its civil registry, embracing the guidelines adopted by the Ivorian authorities.